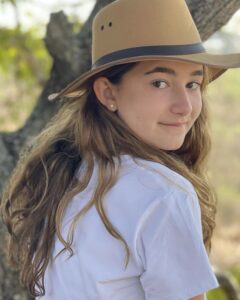 Kate Gilman Williams is a 12-year-old animal advocate, author and the founder of Kids Can Save Animals and Club 15. She launched Kids Can Save Animals to connect her generation with world-renowned conservation organizations, technologists, policymakers, and global leaders who work to save wildlife and wild spaces. Through her passion for wildlife conservation and penchant for education, Kate is focused on teaching and inspiring kids and teens on how to take action and become part of the global solution and the benefits of helping the animals proving that advocacy has no age limit.

One aspect of Kids Can Save Animals is her podcast, Club 15, named so because we lose one elephant from our planet every 15 minutes. Club 15 was created in partnership with Sarah Maston and Daisuke Nakahara of Microsoft and is an extension of Project 15 from Microsoft. Each episode of Club 15 connects youth with top scientists, technologists, and conservationists working on the ground to save animals from extinction. Microsoft contributed a learning lab for Club 15 so kids can learn how Computer Vision and Artificial Intelligence (AI) are collecting data and how technology is at the forefront of saving Animals.

Kate was recently named the first Youth Ambassador for Born Free USA. In her role, Kate will speak to her generation about the exploitation and suffering of animals living in captivity, educate kids and teens that animals being used for any kind of human entertainment is wrong, what the illegal pet trade is, and how we all can help end the wildlife trade and trophy hunting. In the Summer of 2021, Kate partnered with Jenn Hartmann Luck, Austin-based singer, and songwriter, to produce a song called, “Kids Can Save Animals.” With each download, 15% supports Re: Wild where Leonardo DiCaprio is the founding board member. At age 8, Kate authored the book Let’s Go On Safari! which takes readers on a safari adventure and encourages children to speak up for animals who don’t have a voice. All sales from the book support the Jane Goodall Institute, The Sheldrick Wildlife Trust, and Re: Wild.

Kate is also inspiring kids to advocate for climate change. Realizing the connection of rising global temperatures and extreme fires, she launched “Quarters For Koalas” to raise money for koalas who were harmed by bushfires in Australia. Quarters For Koalas can be replicated by any school or group.

Kate is a 2019 and 2020 winner of the prestigious Gloria Barron Prize For Young Heroes. In 2020 she received the Daily Point of Light Award was established by the late President George H.W. Bush. Kate has appeared in news outlets nationwide including Live with Kelly and Ryan, ABC7 New York, KTLA-TV Los Angeles, the Austin American Statesman, austin360.com, Austin Women, CBS Austin, KABC-TV, WABC-TV, and more. When not working at Kids Can Save Animals, Kate enjoys acting and playing volleyball. She lives in Austin, Texas. For more information on Kate’s partnership with Microsoft, go here and to learn more about the work Kate is doing through Kids Can Save Animals, please visit kidscansaveanimals.com for more information.