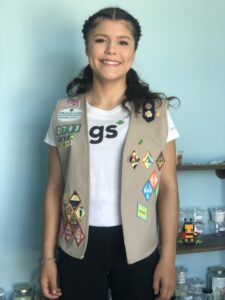 Alicia Serratos is a 14-year-old, activist, wrestler and Girl Scout. Alicia starred in the documentary The Need to Grow, has been involved in numerous projects and volunteers her time to different causes. She has started Seed Libraries, planted community fruit trees, collected Lego for underprivileged kids, taught girls the basics of car maintenance, and connected with some of the world’s most amazing change-makers.

Alicia is now taking on Fast Fashion and raising awareness about textile pollution with Second-hand Sister and RiPurpose. She is a part of the prestigious Reign Wrestling Club with several national  accolades. She has been a Girl Scout since the age of five, earning her Bronze and Silver Awards.