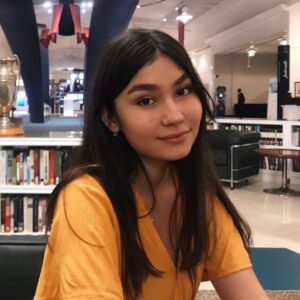 Lara Rudar is a 17-year-old artist, filmmaker, and environmental advocate based in the United Arab Emirates. Her short films have been screened in film festivals around the world and in 2019, she received the Nikon and Emirates Airlines ‘Young Filmmakers Award’ at the Emirates Short Film Festival. Currently, her photography and Virtual Reality artwork centered around the environment is exhibiting at the Warehouse421 Gallery in Abu Dhabi.

Last June, she was selected as one of the 20 Official UAE Ambassadors for Nature to represent the Connect with Nature program and is currently working closely with Emirates Nature-WWF to create environmental initiatives that provide youth in the UAE with the experiences, knowledge, and skills to become future change-makers and environmental leaders. Some examples include climate change education workshops, large-scale beach clean-ups, quiz nights on environmental topics, environmental debates, and hosting documentary movie nights in the efforts to increase understanding of climate change in the country.

She further contributed to efforts in youth mobilization as the UAE Delegate at the Mock Cop26- a virtual climate conference that was organized by students across the world to demand the implementation of youth-centered climate policies. After a collective final statement was created by combining the policy demands from 140 countries, a legal team of lawyers from ClientEarth and COP26andbeyond helped develop the statement into a treaty which was presented to Nigel Topping, the Hig-Level Climate Action Champion for COP26.

As the Education Coordinator at the Re-Earth Initiative, Lara is now working to promote a wider understanding of climate change by organizing environmental campaigns and creating educational toolkits with her team. She is also the Head Girl of her school and is leading environmental projects and events across three campuses.

In 2020, Lara co-founded the Teenspire Magazine, a digital platform with the aim to amplify underrepresented voices and offer new perspectives on global issues. A record of teens throughout the 2020s, the magazine has grown to a community dedicated to featuring upcoming artists, research projects, articles, and everything creative.