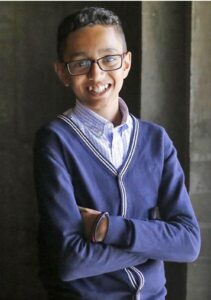 Haaziq Kazi is a 14-year-old innovator, changemaker, student and professional speaker. Haaziq is passionate about the oceans and tackling the plastic problem afflicting  oceans and marine life. At the age of 11 he was invited to a TEDEd talk in New York to talk  about his invention, Ervis the Ship, which is designed to clean oceans, with an aim to solve  the plastic waste crisis problem. He has spoken on multiple other forums including,  TedxGateway Mumbai, TedxJGEC, VJTI college, TedxICEM, Seed and Chips Summit, and  Economic Times Global Business Summit to raise awareness on the danger of plastic  pollution. This year, Haaziq was invited to speak at the 2020 United Nations session of the  High-Level Political Forum (HLPF), on behalf of the United Nations Major Group for Children  and Youth (UMGCY).

He is highlighting the magnitude of the plastic waste problem, how it is affecting life in  general including humans and his solution of ERVIS which he envisages will help clean the  oceans of plastic pollution. Haaziq is also a vocal proponent of circular economy and is  currently engaged in creating viable solutions on alleviating inefficiencies in the current  consumption of plastic at a macro level and adhering to the circular economy framework.

Haaziq is also working towards creating his awareness campaign and has established an  NGO, the Ervis Foundation, wherein he is working with the youth of today to bring a  generational change in the way they interact with plastic. He has created multiple initiatives  in his foundation including educational initiatives such as the Blue Workshops and digital  platforms which offer an alternative to plastic. 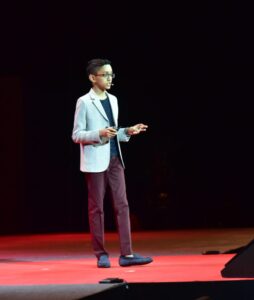 Haaziq has also aligned his foundation with UN SDG 12 and 14 and his foundation has  currently achieved its first-year goals aligned with UN SDGs. In their education initiative, they work with schools and children and in one year they have engaged with over 1600  children across India and UAE to spread awareness and develop solutions to fight plastic  pollution. Haaziq regularly speaks at various forums nationally and internationally and in  media highlighting the perils of the plastic issue plaguing his generation.

Haaziq is currently appointed as the Regional Focal Point for SDG14, Youth Constituency for  the United Nations Major Group for Children and Youth.